Outline of our laboratory 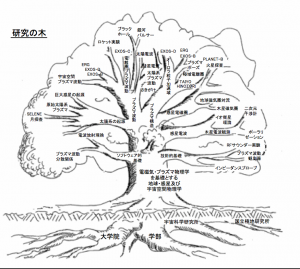 The research of planetary plasma physics was opened when professor Oya started observation of Jovian decameter radio waves at Zao observatory in 1974. He also realized the in-situ observations in space by using rockets and satellite missions such as Jikiken (1978), Ohzora (1984), Sakigake (1985), Akebono (1989), and Nozomi (1998). Since 2000, professor Ono follows the road to the planetary plasma physics theoretically and experimentally from the ground as well as on-board the spacecrafts to understand the electro-magnetic and plasma phenomena in space.

The research activities of the Planetary Plasma Physics group can be summarized according to the four subjects. They are; (1) space plasma and plasma waves, (2) surface and subsurface sounding of moon and planets, (3) ground based observation of radio waves, and (4) theory and simulation. All of the research activities and scientific results have significant contribution to the world-wide scientific communities of the Solar Terrestrial Physics and Planetary Science. They are also searching for more extensive contributions for fundamental physics, planetary science and astrophysics for the future science.